Children at an Oldbury school are urging parents and carers to park safely at drop off and pick up times – or risk a fine.

Pupils at Christ Church C of E Primary School have designed their own banners which are being displayed on the railings outside the school in Albert Street.

Sandwell Council is also installing new signs and road markings and working with West Midlands Police on the issue – and warning anyone who parks dangerously outside the school that they could receive a fine or points on their licence.

Sandwell Council’s road safety team have delivered assemblies and lessons with pupils and the school after concerns were raised about parking around the school site.

As part of the work, the children designed their own banners and the winning designs have been printed and put outside the school to urge drivers to take more care.

Amelia, aged eight, designed an eye catching banner saying: ”Slow down, children about” and Thierry , also aged eight, produced one with the slogan “Look out, little ones about” 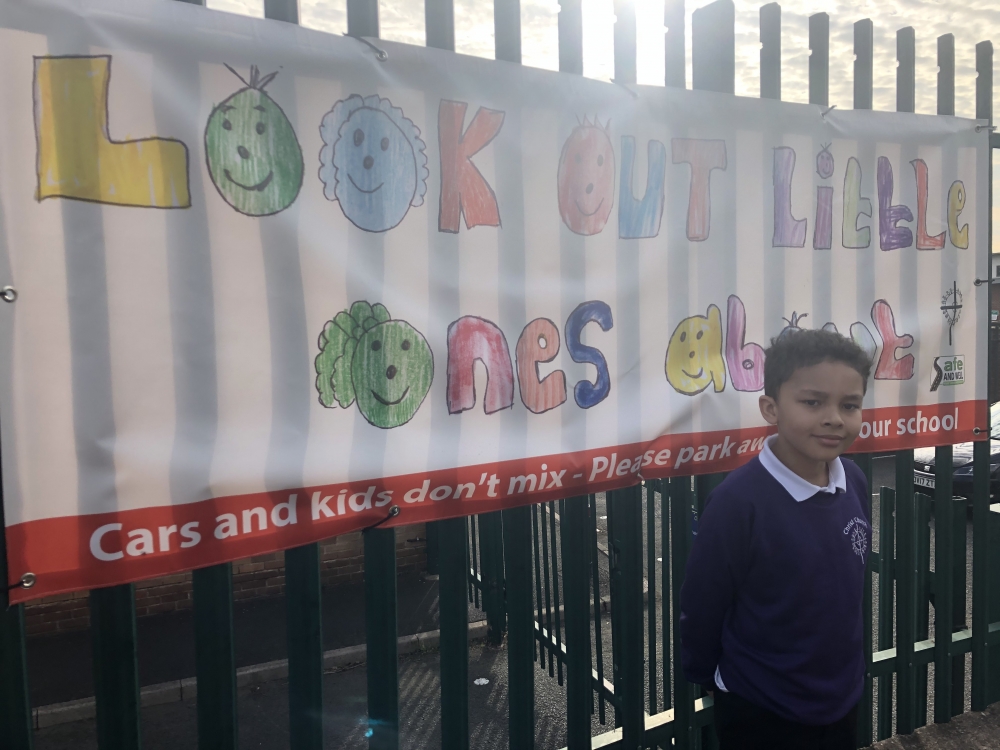 Headteacher Michaela Chapman said: “We really hope these lovely banners will make people think twice before parking in an unsafe place. The current parking situation is becoming increasingly difficult and we are keen to be trying anything we can to keep our children safe.”

Sandwell Council’s cabinet member for sustainable transport Councillor Jackie Taylor said: “Earlier this year, the head teacher, staff, parents and children told us they were very concerned about the irresponsible and dangerous parking that was taking place outside school putting everyone at risk during their journey to school.

“I don’t understand why some parents and carers are risking the welfare and safety of children and other road users in this way.

“School assemblies were delivered to raise awareness of the situation, encourage as many children as possible to walk to school and ask the children to create banners with messages that would influence drivers to park safely around the school area.

“We also worked with our highways road safety engineers to put in signs and road markings around the school to warn drivers of the need to drive carefully and reduce their speed. These will be in place in the next few weeks.

“We are continuing to work with West Midlands Police and our parking team to ensure that drivers follow the rules and penalties will be issued for failing to do so.”