Fly-tipping is illegally dumped waste. It might be household rubbish, garden waste, mattresses, construction materials (like bricks and rubble) or electrical items (fridges and freezers). 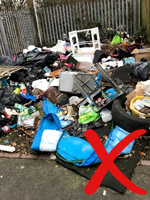 Fly-tipping can be dangerous, pollute land and waterways and costs the taxpayer significant amounts of money to clear away.

If you are worried that the fly-tipping is a danger to the public, for example if it is blocking a road or there are dumped chemicals, please call us immediately on 0121 368 1177. Our opening hours are Monday to Friday 8am to 5.30pm.

If it's not dangerous, please fill in the form. 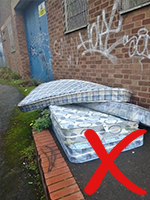 In Sandwell, you will be issued with a £400 fixed penalty notice if you are caught fly-tipping.

The dumping of controlled waste is a serious criminal offence which carries a fine of up to £20,000 (unlimited if indicted to the Crown Court) or an offender can even be sent to prison.

It is also an offence to permit (or allow) fly-tipping.

Fly-tipping is often associated with dumping waste from vehicles. The person in charge of the vehicle can also be prosecuted, which means it is possible for a prosecution to happen when only the vehicle, not the driver, can be identified. The police also have powers to seize vehicles used for fly-tipping. 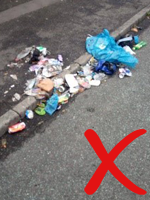 By law, you are responsible for making sure the person who collects your waste is a licensed waste carrier.

From 1 March 2020, householders in Sandwell face a £400 fixed penalty notice in the following situations:

We provide a bulky waste collection service for Sandwell residents living in houses or flats who have large household items such as furniture, fridges, freezers and other things that won't fit in your bin.