You may already have a form of photo ID that is acceptable. Find out more about Voter ID and how to get free photo ID if you need it →

What is a Community Trigger?

A Community Trigger gives victims and communities the right to demand action on problems with anti-social behaviour (ASB) they have reported in the past.

The Community Trigger can be used by anyone who has reported ASB but feels no action has been taken.

The Community Trigger is aimed at putting victims first and to hold agencies responsible for managing anti social behaviour to account.

Agencies including councils, the police, local health teams and registered providers of social housing who receive a Community Trigger report will then need to conduct a case review.

Who can raise a Community Trigger and when?

You can raise a Community Trigger if:

Anyone can raise the trigger on behalf of the victim – for example a family member, friend, carer, councillor, Member of Parliament or other professional person.

It doesn't matter who you originally reported the ASB to (the council, the police or your landlord) – please use the Community Trigger form here on our website.

What happens after a Community Trigger is raised?

When you complete the Community Trigger form, we will contact you to say we have received it and let you know what will happen next.

Your completed form will be sent to Sandwell Council's Community Safety and Anti-Social Behaviour Manager.

A member of the ASB team will contact you, within two working days.

What is not suitable for the Community Trigger?

The Community Trigger allows for a review of an ASB case, bringing a number of agencies together to look at whether there is anything further than can be done in an ASB case.

It aims to find solutions that may not have been considered before. Its primary aim is not to find fault with an organisation’s response, rather to see whether other agencies can help support the matter or see whether there are other things that can be done.

Organisations will also have a complaints process that is designed to deal with concerns you might have about the service you have received. This process is more appropriate where you feel you have been let down by an organisation and/or you feel they have done something wrong. The Community Trigger is not intended to be an alternative method of dealing with these issues.

Examples of concerns that are appropriate for the complaints procedure include:

If you are not satisfied with the service you have received in ways similar to those listed above, then you should follow the independent complaints process for the organisation that you wish to complain about.

How to make a complaint to Sandwell Council

Independent information about the Community Trigger

Feedback on the use of the Community Trigger

During 2022, a total of 58 Community Triggers applications were received. Of those, 47 did not meet the threshold, while two proceeded to a full case review. Five were withdrawn, cancelled or listed for no further action, and four decisions (on recent applications) were pending at the end of the year.

We received significantly more Community Trigger applications in 2022 than we did in 2021. During 2022, the Anti-Social Behaviour Team continued its extensive work with ASB Help (an independent victims charity). We delivered staff training around the Community Trigger to housing associations and our contact centre staff; we also acted as an independent chair or panel member for case reviews held by several other responsible authorities. 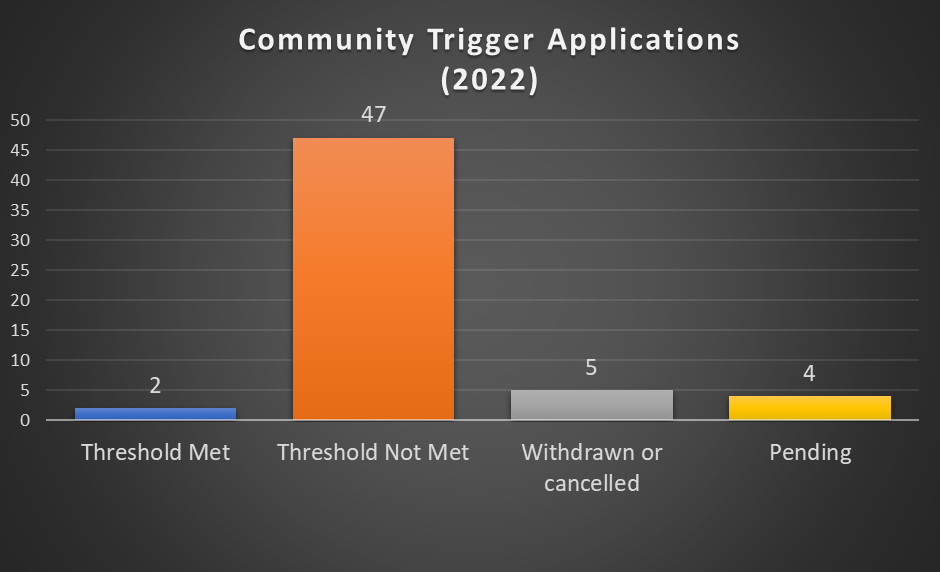