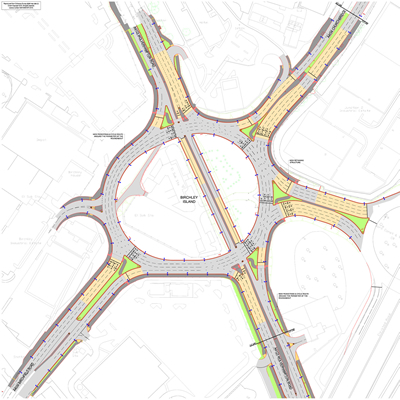 We have drawn up plans to improve traffic flow at Birchley Island in Oldbury.

We carried out a consultation exercise on four improvement options in April 2014 to find out how drivers using the junction could be affected. Two of these options were rejected as a result of detailed analysis of their performance and benefits.

In January 2015, residents, businesses and road users were asked to choose again between the remaining two options.

The most popular option was the 'two-way hamburger island'. This means the Wolverhampton Road will go through the island in both directions next to the electricity sub-station.

There will also be four lanes from the M5 junction 2 to and from Birchley Island and traffic signals from the Churchbridge (Oldbury) approach.

The plans are expected to be approved by Sandwell Council's cabinet later this month.

If approved, the council will then approach the Black Country Local Enterprise Partnership to get funding for the project.