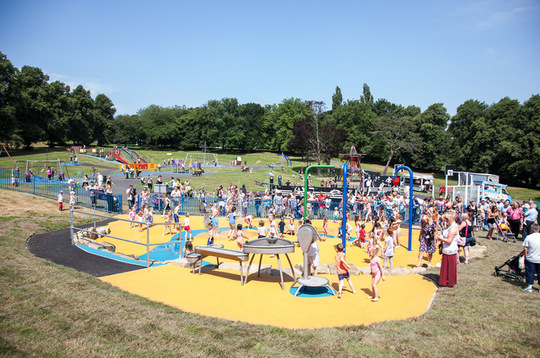 £6.3million has been to restore Dartmouth Park to its former glory. The showpiece Victorian park sits on the doorstep of West Bromwich town centre and provides visitors and residents with an attractive and high quality green space.

Work at the park got under way in late 2009 and has seen the installation of an outdoor gym completed in October 2010 and the restoration of the park's original perimeter wall, decorative railings and war memorial in April 2011.

A new pavilion officially opened on Bank Holiday Monday (4 June 2012) during a day of Jubilee celebrations, providing a café, toilets, an events room and offices for park staff. It also features a walkway surrounding the building and a viewing tower.

The new sensory garden officially opened on the 2 November 2012, and it was designed in partnership with The Friends of Dartmouth Park for visually impaired visitors. In addition, Mountain Bike Pump Tracks have been built at near by Sandwell Valley, which opened in May 2013.

At the beginning of 2014 work started to create a children's water play area which opened in July 2014, marking the end of the restoration project.

The restoration of Dartmouth Park has:

View the progress in our photo gallery

We will keep you up to date with the progress of the Dartmouth Park restoration project by regulary uploading photographs as it begins to take shape.

On Facebook, we can be more interactive with you  You can leave feedback and comments, plus you can post items and also check out what's happening in Sandwell, plus get all the up-to-date information you need about important council updates.